A downloadable experiment for Windows

An experimental horror game I made in a weekend, exploring isolation, the uncanny valley, and repetition as core concepts. You play as a lonely man out at sea for a lovely day of fishing. A mood piece.

A Wonderful Day for Fishing.zip 44 MB

this was cool and did a great job with the atmosphere and such! gg

I love this game its so cool!

Wish there was an ending, still an awesome game tho!  Lots of random freaky fish and all sort of stuff that can happen!

Reply
The L3rNa3aN92 days ago
It was a fishy game to play, but nevertheless I had a pretty good time with it!
Reply
KittyCocoGames249 days ago(+1)
Nice little weird game! I enjoyed this even without an ending to it. I liked seeing how weird things got as I caught more and more disturbing fish. Here's my gameplay of it! Check it out and if you enjoy it perhaps give me a sub to help me grow my fledgling channel! Thanks!
Reply
WeirdChickenGuy318 days ago(-11)

One of my favorite fishing horror games.  I loved the variety of fish and other things you could catch.

Reply
Riceling1 year ago(+1)
So sorry for the super late comment, but loved this unique and interesting little game!

Without any music and only the ocean sound, the mood is immediately set and I can immediately feel the isolation portion! Some of those changes were down right nuts, and I loved it! Really made me feel like "This is what will happen in isolation. You'll go crazy"!

The only suggestion I would have for this game is that I do with there would be a bit more ways to interact with the character. While I know that seems to be never intended, I still think it might help, and add some interest in finding different endings!

Really liked it and hope you the best! :)
Reply
becket1 year ago(-1)

Looking for a new horror game to play, but i don’t do well with jumpscares. does this have any?

No loud jumpscares! There are a few "surprise" moments that are revealed by menus closing but there are no loud, abrupt sounds to accompany them. Hope that helps!

I was playing this game late at night and it unnerved me in so many ways.

Very cool in theory, but needs a bit of work. I ate a bunch of different fish and nothing really happened,, I only got any sort of reaction for 2 of the fish (out of like 20+). The red cube made me sink, but the game didn't end. Then I had trouble actually exiting, as the game sort of glitched out and alt-f4 wouldn't close it. This could be built up into a really great game, but what exists now seems like merely an unfinished foundation

I loved the game, it was very detailed and calming . I love the part where you can eat the fish, although I wish there was more to it. I'd love to get the man on the boat's number, but anyway. 50 fish out of wow.

Reply
Alpha3 years ago
this was an interesting game.
Reply
noli3 years ago

Very calm game. It's bad that its very short, and it ends quickly. I tried all of the options and did everything possible, more in here would be appreciated. It just doesn't have an end. It doesn't feel like a psychological horror. I find it to be very calming to sit inside of a thing, and just fishing forever. I would recommend for you to expand this game in particular and develop it and add multiple endings.

It would be cool if this was ported to flash/web.gl/html and could be played in a browser.

The idea of this game as a psychologival horror is pretty good, but other than that, there's not much to it which can hold the attention of the player. My suggestions:

Thanks for the weirdass game. I have no idea what the goal was but I did a thing I guess, lol. Here's my Twitch playthrough.

Reply
Austin The Kat4 years ago

Well, I had fun playing overall but I got really bored eventually. It was too repetitive for me, and I honestly had no idea if the game even had an end to it.

Eat the cube of meat.

Very.... um.... interesting game. I do think the idea is interesting but there seems to need to be more to it. Something to keep the player more interested. Even though the video is only 7 minutes long, it's edited down quite a bit from about 30 minutes of me just clicking. Either way though, I like the concept and the original horror idea.

i love fishing bffs for fishing

okay, seriously, how do you exit. I need to do school.

have you heard of "alt f4" ? it's a good way to force quit any aplication

I had the same issue and Alt F4 didnt help. Nor did CTRL+ALT+DEL. I had to manually restart.

I think this game was incredibly interesting. Just a good creep factor that makes it so intriguing, and wanting to play to discover more. However, it began to grow repetitive and rather boring as you continue to catch the same fish and eating or releasing seems to have no impact on the game play. I actually got excited when it started raining, though I'm not sure if it was always raining.

More variety would be nice, and I also can't figure out how to exit the game, haha.

Nice to see something so unique, and so surprisingly calm yet disturbing.

Nice to see a bit different take on horror. A relaxing fishing game with a few suprises. You did this one really good Nicklives.

I enjoying the slow gameplay and fishing experience. Cute and simple graphic. Good variety of fishes to catch even if they later comes back more often. The only thing i missed was some different sound in the background. The wind does a good job, but some bird sound or something to change it up would been nice too.

I gonna try out more of you games Nick. Really like what you did with this game.

What an interesting game.. I think I became Aquaman? But I lost my eyes for a second.. I think I had fun fishing!

What a delightfully unnerving game this was...

Hello, this is the second part of my gameplay. Please show some support. Thank you.

this game was interesting I had a lot of fun with it. I appreciate the undertones that run through it. Also I go a little sea crazy!

After playing the game and reading the description, I understand that the game is trying to explore loneliness and desperation to end the game by eating the red cube.

The concept of having background music as the sound of the waves at the sea sort of actually made the mood more calming and relaxing (to me). I was actually playing the game feeling quite relaxed and even after eating the red cube and watching the man sinking into the ocean, I didn’t really feel the part of horror in the game.

Personally, I feel that loneliness comes from the feeling when you are present but everyone treats you as if you were absent or invisible to them. I personally (to me) feel that the concept of feeling lonely is a lacking in the game because we are just playing as an old man fishing until we want them to stop by consuming the red cube. I hope that you can develop and build on the idea of loneliness.

Overall, this is a very interesting and good game that will attract many people’s attention. I hope to see more endings and a better version of the game in the future. Good job!

Yeah, because fishing as a concept for video games has never in the history of man been utilized before this point in time. A cartoonist on Tumblr is the first human being to have even conceived of fishing.

This is a nearly 4 year old prototype I made back in late 2014. While the idea is incredibly similar, this is just a coincidence. Here’s a link to a post I made featuring the game on SA back in 2015: https://forums.somethingawful.com/showthread.php?threadid=3648165&userid=199281

Definitely one of the weirdest game i've played. The artstyle was nice, but i didn't rly get the point of the game or the "goal".  I know it's an experimental game but still, a bit of explanation would be good imo. But other than that it was a good game, simple and weird. 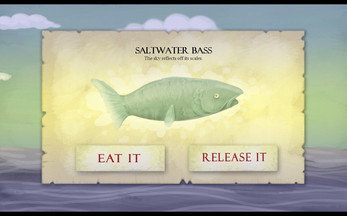 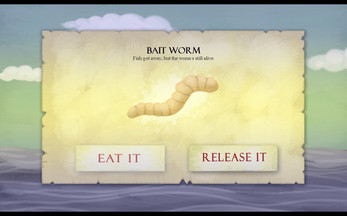 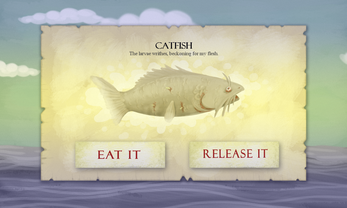 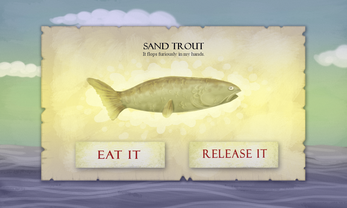 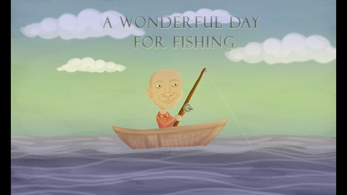